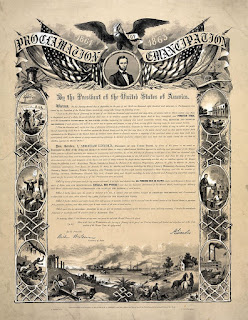 WE ARE now upon the verge of the fiftieth anniversary, since the Immortal Abraham Lincoln, then President of the United States, by the grace of God hurled against the institution of American slavery the thunderbolt which had been smelted in the furnace of fair play, justice and eternal equity. Well do I remember the circumstances and incidents connected with my surroundings and experience on that occasion. I had, but a few years before the great Civil War began, left South Carolina, the state of my nativity, with a young and beautiful wife, and had gone to Baltimore to enter the Itinerant Ministry of the A. M. E. Church, which Church I knew nothing about till by chance I visited New Orleans in the fall of 1857, and was told of its existence by that great man, Rev. Dr. Willis R. Revels, the then pastor of the St. James A. M. E. Church, which providentially, had found its way into that city. He was not through explaining the condition, prospects, and the intention of this ecclesiastical body, that I had never heard of before, till I arose from my seat and offered him my hand and said, "I wish to join your Church." As he extended his right hand I said, "This is only the commencement, and you can put me through whatever crucible your church law demands, as I was free born, and think I can stand the test." I drew from my pocket my license as a Local Preacher in the M. E. Church South, which he carefully read and said, "I will receive you again before my whole congregation Sunday, day after tomorrow, which he did in due form. The St. James Quarterly Conference recom- mended me to the next session of the Annual Conference, which was to meet in St. Louis, Mo., in August, 1858.

When Conference met in St. Louis I was present, and was admitted on probation after standing what I regarded a rigid examination, and trying to preach a trial sermon, which the Annual Conference severely criticized for three hours the next day. I thought I would fail to be admitted till finally Bishop Payne arose and said, "Now, brethren, you know that this young man, Bro. Turner, preached a more able sermon than one-half of you can deliver, for he did not know what was going to be his text till I gave it to him as he was entering the pulpit. Yet I regard his effort highly com- mendable." These words or remarks of Bishop Payne turned the tide, and I was unanimously admitted on probation into the traveling work. Then Bishop Paul Quinn, who was occupying a seat in the Conference, rose from beside Bishop Payne and came to where I was sitting and said, "My young brother, you need not be discouraged, because these older men went for you as they did, everybody who is admitted into the Conference has experienced the same thing, and a number of applicants have gone out of the door and have never been seen since. They treat everybody that way, some for fun and others to give you a taste of the Itinerant life, before you enter upon it." Bishop Payne transferred me to the Baltimore Conference, and assigned me to the Tissue St. Mission, where I received from ten to twenty-five cents a week for support. I frequently had to give my wife ten cents to go to market. She would buy one cent of this, two cents of that, and three cents of something else, but she would purchase enough in one way and another to provide a respect- able meal. Thus we had to exist on that amount, and what the people would voluntarily donate, till I was sent to another mission, which generally allowed me fifty cents a week. Somehow we man- aged to live with an occasional lecture from myself on the subject of Physiology, until Bishop Payne chanced to pass by our residence one day and came in and inspected my library and was dumbfounded at our books and the various subjects which they treated. The Annual Conference was only a few weeks off, and he appointed us to Israel Church, which had several hundred members, in Washing- ton, D. C. We had a fine congregation and every seat filled, and Israel Church was the center of attraction. Rev. A. M. Green, D. D., now of the Louisiana Conference, reported my sermons and gave me a notoriety and a popularity every Monday, which increased the size of my congregation till hundreds had to stand out doors and listen as best they could to the words which came out through the windows. I am under a debt of gratitude to Dr. Green from that day to this.

The Civil War between the states was then in full blast, and the seeming odds were at that time in favor of the Confederate forces, or to use a familiar term, "the rebel army." The agitation of enlisting colored soldiers was engaging public attention. Israel Church was only a couple of hundred yards from the United States Capitol, where mighty speeches were being made in the United States Congress in favor of enlisting colored men in the Union
army. On several occasions I could be found in the galleries of the United States House of Representatives, listening attentively to such great men as Lovejoy, Henry Winter Davis, of Maryland; Kelley, of Philadelphia, and in the gallery of the Senate of the United States, while such men as Charles Sumner, of Boston; Wade, of Ohio; Wilson, of Massachusetts; Bishop Simpson, of the Methodist Episcopal Church, and others of great distinction and eloquence, either spoke or preached to the vast throng of listeners.

In 1862, on the 22d day of September, Mr. Lincoln issued a proclamation that in a hundred days, unless the rebel army disbanded, and the several Southern states resumed their relation to the general government, he would declare the slaves in all the states free with a few local exceptions. The newspapers of the country were prolific and unsparing in their laudations of Mr. Lincoln. Every orator after reviewing in their richest eloquence, concluded their speeches and orations by saying, "God save Abraham Lincoln," or "God bless our President." Mass-meetings were held in Baltimore, Philadelphia, New York, Boston, Cincinnati, Cleveland, St. Louis, San Francisco and hundreds of minor towns, and such a time I never expect to witness on earth in the future. I may witness such a time again in heaven, but not in the flesh.

In the great Union Cooper Hall in New York City, a colored man leaped and jumped with so much agility when the proclamation was read that he drew the attention of every man and woman, till Mr. Lincoln's proclamation was scarcely listened to. New songs were sung and new poems were composed, and the people shouted to such an extent that horses became frightened, and many ran away and smashed carriages into kindling wood. Whites and blacks realized no racial discriminations. On the first day of January, 1863, odd and unique conditions attended every mass-meeting, and the papers of the following day were not able to give them in anything like detail. Long before sunset Israel Church and its yard were crowded with people. The writer was vociferously cheered in every direction he went because in a sermon I tried to deliver I had said that Richmond, the headquarters of the Southern Confederacy, would never fall till black men led the army against this great slave-mart, nor did it fall and succumb to the general government till black men went in first. This was only a popular prediction, and delivered under a general excitement, but strange to say, it was fully realized.


Seeing such a multitude of people in and around my church, I hurriedly went up to the office of the first paper in which the proclamation of freedom could be printed, known as the "Evening Star," and squeezed myself through the dense crowd that was waiting for the paper. The first sheet run off with the proclamation in it was grabbed for by three of us, but some active young man got posses-sion of it and fled. The next sheet was grabbed for by several, and was torn into tatters. The third sheet from the press was grabbed for by several, but I succeeded in procuring so much of it as contained the proclamation, and off I went for life and death. Down Pennsylvania Ave. I ran as for my life, and when the people saw me coming with the paper in my hand they raised a shouting cheer that was almost deafening. As many as could get around me lifted me to a great platform, and I started to read the proclamation. I had run the best end of a mile, I was out of breath, and could not read. Mr. Hinton, to whom I handed the paper, read it with great force and clearness. While he was reading every kind of demonstration and gesticulation was going on. Men squealed, women fainted, dogs barked, white and colored people shook hands, songs were sung, and by this time cannons began to fire at the navy-yard, and follow in the wake of the roar that had for some time been going on behind the White House. Every face had a smile, and even the dumb animals seemed to realize that some extraordinary event had taken place. Great processions of colored and white men marched to and fro and passed in front of the White House and congratulated President Lincoln on his proclamation. The President came to the window and made responsive bows, and thousands told him, if he would come out of that palace, they would hug him to death. Mr. Lincoln, how- ever, kept at a safe distance from the multitude, who were frenzied to distraction over his proclamation.

I do not know the extent that the excitement in Russia led to, when the humane Emperor proclaimed the freedom of twenty-two million serfs, I think in 1862, but the jubilation that attended the proclamation of freedom by His Excellency Abraham Lincoln, I am sure has never been surpassed, if it has ever been equaled. Nor do I believe it will ever be duplicated again. Rumor said that in several instances the very thought of being set at liberty and having no more auction blocks, no more Negro-traders, no more forced parting of man and wife, no more separation of parents and children, no more horrors of slavery, was so elative and heart gladdening that scores of colored people literally fell dead with joy. It was indeed a time of times, and a half time, nothing like it will ever be seen again in this life. Our entrance into Heaven itself will only form a counterpart. January 1st, 1913, will be fifty years since Mr. Lincoln's proclamation stirred the world and avalanched America with joy, and the first day of next January, 1913, our race should fill every Church, every hall, and every preacher regardless of denomination should deliver a speech on the results of the proclamation.
Share This